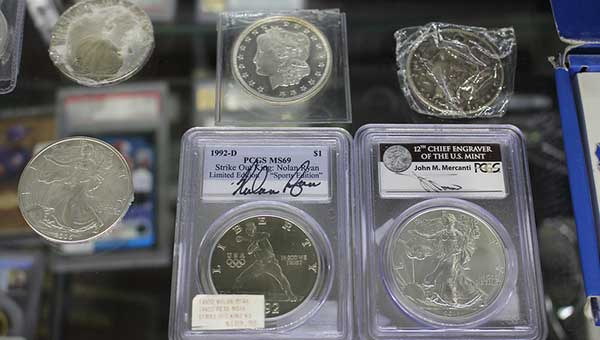 Top 10 Most Valuable Coins Ever Sold

At Central Mega Pawn, we get excited whenever a rare coin finds its way into our store. Rare coins bring so much history with them, and it’s hard not to be at least a little awed. If you love buying, selling, and pawning rare coins as much as we do, keep reading for a list of some of the most valuable coins ever sold.

There are plenty of coins all over the world that are worth even more than the coins on this list. They are said to be priceless, because they are so rare and unique that they are housed in museums and will likely never be available to the public.

Also, sometimes national mints create unusual coins that are never sold or put into circulation. For example, Perth Mint in Australia unveiled The Australian Kangaroo One Tonne Gold Coin, which went on tour in Europe and is now on display in the Perth Mint’s collection.

So, the coins on this list have been bought and sold on the public record. It does not include priceless treasures that you can only view when they are on exhibit in a museum, coins that were never made available to the public, or coins that were sold via private arrangements.

All prices are in U.S. dollars and reflect the most recent publicized sale.

This five-cent piece was unauthorized by the U.S. Mint, and only five are believed to exist today. The legend of these coins states that a U.S. Mint employee struck them in the middle of the night. The rarity and legend around these five coins make them one of the most sought-after pieces in American numismatics.

These coins were created to use as part of a diplomatic gift during a diplomat’s visit to Macau. Although the coins were struck and distributed in the 1830s, the coins themselves are stamped with the year 1804. They are comprised of around 90% gold and are often considered the “King of American Coins.” Several other classes were created of this coin, but the most valuable among them are the Class I series, which were the coins created solely for gifting purposes.

In 2007, the Royal Canadian Mint produced the world’s first million-dollar coin. However, that is not the coin’s only distinction: it is twenty inches in diameter, over an inch thick, and is comprised of over 220 pounds of 99% pure gold. The coin was produced to help promote the release of the Canadian Mint’s new pure one-ounce gold maple leaf coins. To date, five of these incredible gold bullion coins have been purchased by private investors.

Much like the 1804 Bust Dollar coin, these coins were gifted to foreign dignitaries, such as the Sultan of Muscat. It has changed hands several times since the mid-1800s and rarely appears in public auction houses.

This particular example of the famed 1913 Liberty Head nickel series is by far the finest known example of only five specimens. This specimen has a highly mirrorlike surface in the field and is only one of the five known examples to exhibit this characteristic. However, no records exist in any mint for its production run or numbers, which is cause for controversy in the numismatics community. As a result, its grading varies wildly depending on the grader.

These coins were minted by Ephraim Brasher, a goldsmith, and silversmith in New York City. Because the U.S. Mint did not exist at the time, colonies had to mint their own coins; as a result, private metalsmiths like Brasher contracted with colonies to strike their coins. The design of these coins is similar to the design of popular coins of the period, such as Spanish dubloons.

By far the oldest coin on this list, as well as most other lists of valuable coins in the world, the age of this coin is a big part of what makes it so valuable. There are currently only three known examples of this coin left in the world. When you consider that it’s been around for over 670 years, the fact that any have been found at all makes this coin a treasure.

This coin was minted in 1787 by Ephraim Brasher, a silversmith, and goldsmith in New York City, and predates the operations of the U.S. Mint. At the time of its minting, it contained about $15 worth of gold. Unlike the previous 1787 Brasher Doubloon that has the minter’s stamp on the eagle’s wing, this coin sports his mark on the breast of the eagle.

The 1933 Double Eagle is a $20 gold coin and is one of the rarest coins in the world. Although nearly half a million coins were ordered to be minted, the stresses of the Great Depression kept them from being circulated, and all but two were ordered to be melted down. However, around 20 coins were believed to have been rescued from smelting. Nine were recovered, which leaves 13 known examples, only one of which is privately owned.

The Flowing Hair dollar coin was the first dollar coin issued by the U.S. federal government and was minted for only two years. Its size and weight are identical to the Spanish coin of the time, which was popular for trade in the Americas. It is technically a perfect coin, especially for the time, and the most valuable examples have a mirrorlike finish that dazzles collectors. The sale of this coin for over 10 million dollars set a world record for the purchase of a single coin.

Cash Loans Near You: A Guide to Finding the Best Place Near You to Get a Loan

Do you need some quick cash? In these trying and uncertain times, the chances are good that you may find yourself in a financial pinch, due to no fault of your own. Regardless of the reason, be it job loss, an unexpected bill, or other, Central Mega Pawn can help when you need a loan. To help you get through the coming weeks or months of uncertainty, keep reading to find out what is the best place near you to get a cash loan.

Options for your cash loan

When you need some quick cash, there are generally several options available to you. We will list them here to give you a bigger picture of what’s out there:

Why get a cash loan at your local pawn shop?

Your local pawn shop is the best place near you when you need a cash loan. This is because:

What kind of things can you pawn to get a cash loan?

Almost anything of value can help you get the cash you need! However, every pawn shop is as different in the community it serves. At Central Mega Pawn, we love dealing in:

Plus, so much more! The best way to get an idea of the type of items we tend to have is to visit us.

How do I pawn an item to get cash?

Why is Central Mega Pawn the best choice?

For over twenty-five years, Central Mega Pawn has been the pawnshop of choice for people throughout the Inland Empire. We have the experience and resources to help you get the cash you need in minutes. We are proud to serve our community and abide by all federal and state regulations. Visit us today to see how we can help you!